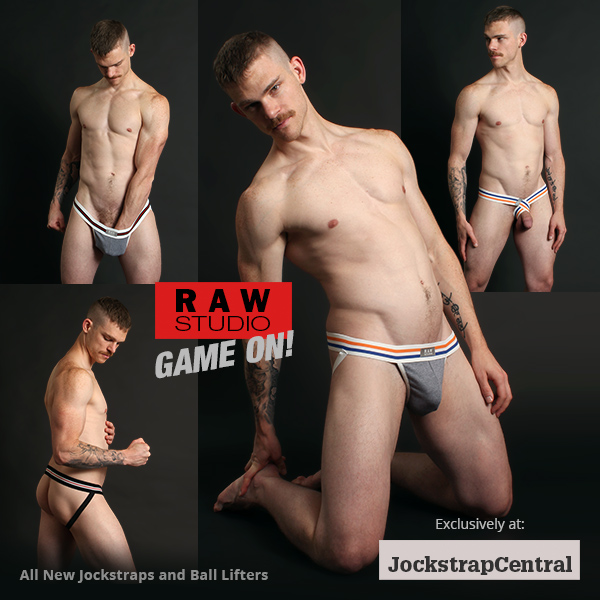 Gear up then it’s Game On! It’s the latest collection of jockstraps and ball lifters from Raw Studio called Game On. This time around the sports inspiration is undeniable: With waistbands channeling sports jocks of yesteryear complete with micro sports striping running around the band. Here’s the details:

With a nod to locker rooms all over the world and team players in sweats – the only thing the Raw Studio Game On Jockstraps are missing is that musky smell of testosterone – but slip it on and after a few good workouts you’re there.

With a heather-grey pouch made mostly of cotton with a hint of lycra so you know this jock breathes well and fits just right. Piping edging the pouch adds support and visual interest. Includes a one and a half inch wide waistband in either off-white or black with contrasting horizontal micro-stripes. Finally, three-quarter inch leg straps finish it all off.

With the Game On Ball Lifters, the concept is simple but the look is hot and the effect is awesome. It’s a single piece of Raw Studio’s super-soft one and a half inch wide Game On cotton elastic. It runs around your waist and drops down in the front to wrap around (and lift) your balls. Stitching where the bands cross ensure everything stays in it’s place. It not only looks great but it feels great lifting up and pushing out your package as any good ball lifter should.

The classic sport jock inspired elastic is off-white with horizontal micro-stripes in either blue and orange or red and black.

While the concept and function is the same as above, this one is slightly different. A loop of of Raw Studio’s super-soft Game On cotton elastic is suspended from a black one and a half inch wide waistband – also made with the cotton elastic. The loop runs down around your balls to lift your package and push it out. It may be simple but it looks great and feels awesome.

As with all ball lifters, the Game On ones are ideal for wearing under light fabric shorts or pants to ensure a great bulge or wear it on it’s own for a hot display suit!

Raw Studio Game On is an exclusive collection for Jockstrap Central. Be sure to check out the Jockstrap Central website for our dirty boy-next-door model Chance as he shows off all the new Raw Studio jocks and ball lifters and much more. Just be warned, there’s tons of uncensored full-frontal photos. 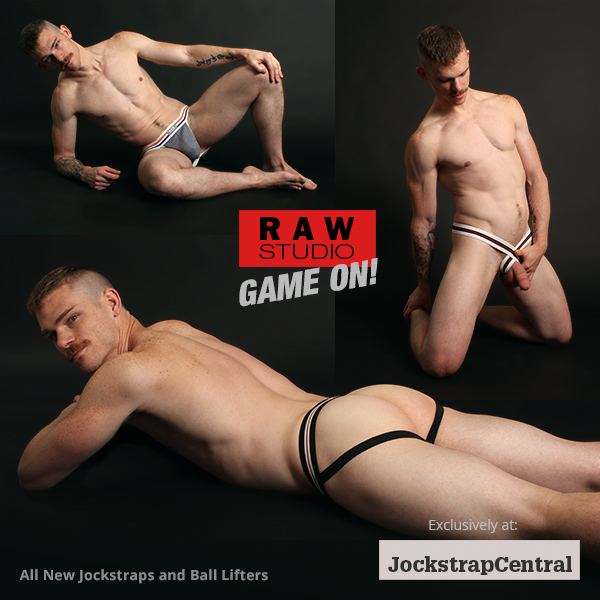