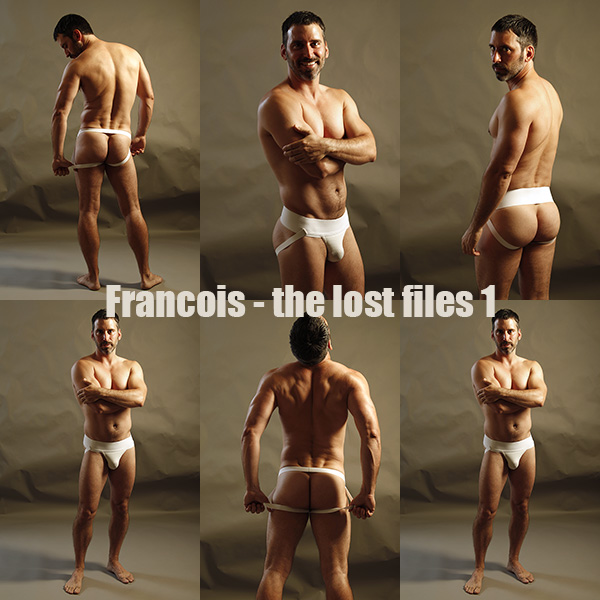 We often get new products shot during Jockstrap Central photo shoots that for one reason or another, never get launched. After 8 years in business we have lots of these photos that have never been published. They deserve to be seen, so we’ll be sharing them with you here.

We discovered Francois during Toronto Pride when he came by our booth wearing nothing but some shorts. He was visiting Toronto from Montreal. He was drop dead handsome with an amazing body so I gave him a card and asked him to call us back if he was interested in modeling before he returned to Montreal. The next day, he called and we set up a shoot.

A little note about the photos: Our photographer was just getting used to a new camera so the photos weren’t the best, they’re a little too high contrast and although I like dramatic lighting, these photos go a bit too far for our purposes. Francois was amazing and professional.

We ended up not using a lot of the photos we shot, and the ones we did use were of products that have now been discontinued or we never ended up bringing in – like the Activeman 3 inch vented jockstrap Francois is wearing in half of these photos.

If you like the vented jockstraps, then be sure to check out our model Thomas in the Activeman Vented Swimmer Jock.