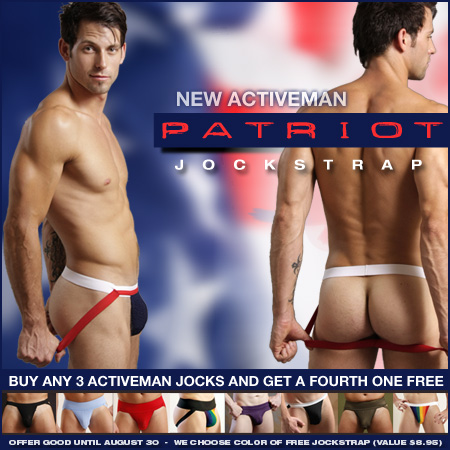 Jockstrap Central’s most popular promotion is back – Buy any three Activeman Jockstraps and they’ll throw in a fourth one for free (color is their choice $8.95 value)

Activeman are rebranded Flarico jockstraps who have been making sports jockstraps since the 1890s. They come in 8 solid colors plus special editions which include rainbow jockstraps, a black and white executive jockstrap, a camouflage jockstrap and the brand new patriot jockstrap.

As for the new Patriot Jock, Jockstrap Central made a request to Activeman to design a new red white and blue jock. The now discontinued SafeTGard Patriot jock was one of their alltime best sellers so they are excited to get a new patriot jock on the shelves.

Also, Jockstrap Central has a clearance on Nasty Pig Rubber Jockstraps, SafeTGard Jockstraps and on BodyWorksman Tanktops, so get over to their sale page are grab them while you can.